Protein: One of the most common concerns with this lifestyle, seems to be the amount of protein a vegan gets in their diet. Let me begin by saying that people actually tend to get too much protein, more than the body requires.

The fitness industry leads people to believe people need large amounts of protein in order to be healthy and build muscle, only so that they can benefit from selling their protein shakes and bars which are usually filled with additives, sugars, and low-quality protein.

Research shows that many people are getting too much protein, often in unhealthy ways such as red meat. By being on a vegan diet you don’t have to worry about getting enough protein, in fact, there has never been a case of anyone with a protein deficiency on any diet. If you are consuming your recommended daily calories you will not have a protein deficiency.

People living a plant-based lifestyle get their protein from beans, peas, lentils, nuts and many more. Mostly all plant foods contain protein, this is why it’s impossible to be protein deficient on a plant-based diet as long as you are not in a calorie deficit. Plant protein is the most healthy way to consume protein, and for those that say “you need meat for protein”, just think about where the animal gets its protein from. Cows and chickens, for example, eat grass and grains, but never eat meat; yet again people think they need to consume beef, chicken or other meats for protein. Well in fact, what you are really consuming is recycled plant protein.

Nobody really talks about fibre as the media always talks about protein and calcium and how “important”, it is to consume enough meat and dairy to get those. We already spoke about protein and I will cover calcium a bit further down. Vegans are usually high in fibre, due to the high amount of plants they consume. Fibre assists the digestive system and leads to healthier bowel movements. High fibre diets also help to fight colon cancer. 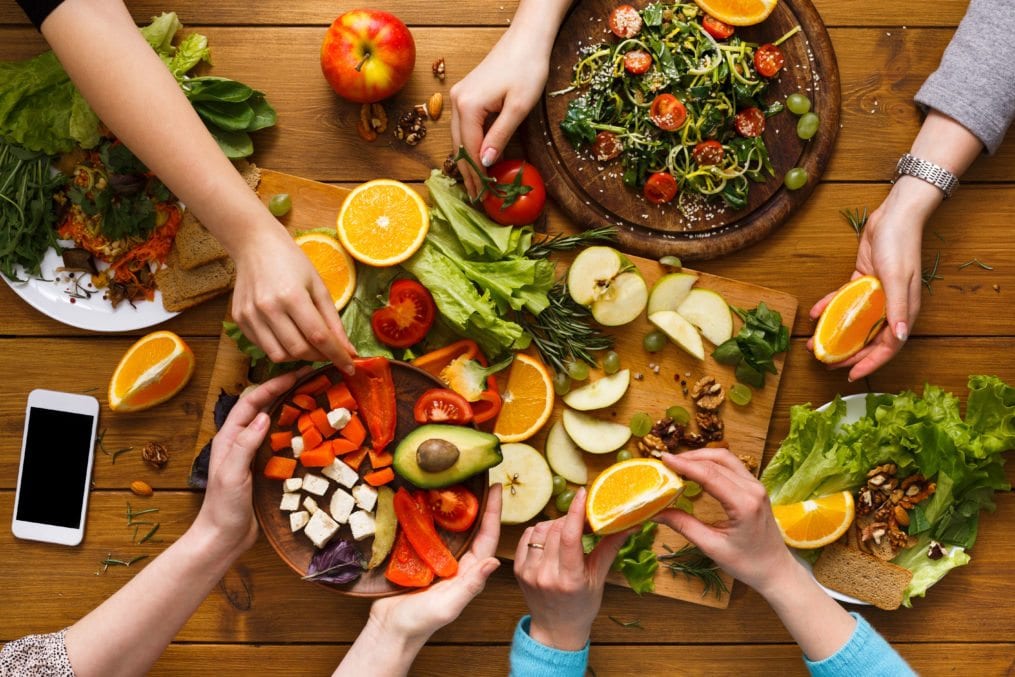 Other nutrients: People who practice a vegan diet correctly consume a wide range of fruits, vegetables, nuts, seeds, beans and grains, therefore many people who are on these diets have excellent nutrient consumption. Many nuts, seeds and dark leafy greens are high in magnesium which helps the absorption of calcium. There are also many plant-based foods which contain calcium such as kale, broccoli, almonds and black beans just to name a few. People living the plant-based lifestyle definitely don’t need to worry about drinking milk to get their calcium. Research shows that people who drink a lot of dairy milk actually have weak bones. Diets high in potassium, which often vegan diets are, reduce the risk of cardiovascular disease and cancer.

Fruits and vegetables provide plenty of antioxidants which protect against cell damage, inflammation and cancer. High levels of vitamin C, often found in oranges, berries, potatoes and others. Vitamin C boost your immune system, keep your gums healthy and help to heal wounds and bruises.

Nuts, seeds, spinach, broccoli and avocado are great sources of vitamin E, as you can see many of the same foods have more than one benefit so you can imagine why plants are so powerful and why if a plant-based diet is done right can have such a good impact on the human health. Vegans can expect to reap the benefits such as good immune system health, protection for the heart against oxidative stress, many types of cancer and Alzheimer’s disease prevention but we can talk about these further down.

Phytochemicals: You might wonder what these are? They are biologically active compounds found in plants. Because of the large amounts of fruit and vegetables consumed by vegans and vegetarians, they are able to reap the benefits. Phytochemicals have potent anti-cancer and anti-oxidant activities in the body.

Cholesterol: Removing meats and dairy products from your diet reduce bad cholesterol. Vegan diets can also cause elevated cholesterol levels through the consumption of excess fats, so it’s important to keep an eye on your consumption of other fat sources such as oils and other kinds of milk. Healthy cholesterol levels reduce the risk of many diseases such as Coronary heart disease, high blood pressure, stroke, peripheral arterial disease and type 2 diabetes. Peripheral arterial disease, otherwise knows as P.A.D is a disease in which plaque builds up in the arteries that carry blood to your head, organs, and limbs. Plaque is made up of fat, cholesterol, calcium and other substances in the blood.

Cardiovascular Disease: A research was done by Dr Dean Ornish in 1990. He split a group of patients into two groups. One of the groups followed a diet recommended for heart disease which included lean meat and the other group followed a low-fat vegetarian diet, coupled with a 30-minute walk a day and giving up smoking. In the second group, chest pain disappeared within weeks and their coronary arteries began to re-open. This just goes to show that heavily plant-based diets can reverse and prevent heart disease. As always, I would recommend a whole-foods plant-based lifestyle.

Type 2 Diabetes: Doctors say that type 2 diabetes is almost always treatable and preventable through diet and other lifestyle changes. Vegans have a reduced risk of this disease by 78%, compared to people who eat meat on a daily basis. This is in part because vegans on average have a lower body weight than meat eaters. 90% of diabetes cases are in overweight patients; vegans have a lower obesity rate than all other dietary groups.

Prostate Cancer: Studies have found that eating a plant-based diet can reduce the risk of this cancer by 35%. So if you think that eating meat is masculine and manly, think again.

Colon Cancer: Also known as bowel cancer, is any cancer that affects the colon (large bowel) and rectum (back passage). A university in California (The Loma Linda) studied 70,000 people and their dietary habits. Those who ate a vegetarian diet had a lower risk of colon cancer by 22%. Those on a pescatarian diet did even better, their risk was reduced by 43%. It just goes to show again that more plants = lower risk of disease.

Female-specific Cancers: Studies have shown that women who eat a plant-based diet have a 34% lower rate of cancers such as ovarian, cervical and breast cancer; there was not much difference in the rates between vegetarians and meat eaters.

Cataracts: Compared with meat eaters, vegans have a 40% lower risk of this disease. Followed by vegetarians with 30% and fish eaters by 20%. More plants, less flesh.

Osteoporosis: The media and the dairy industry has led many people to believe we milk for calcium, so many believe that because vegans consume no milk they have poor bone health. However, large studies have found that there is no significant difference in bone mineral density between vegetarians, vegans and meat eaters. Many health organisations actually recommend high-calcium foods such as tofu, soy, kale, tahini, figs, sesame seeds, oranges, kidney beans and all of these seem to be vegan foods. Some documentaries even show that our body cannot process the calcium found in cows milk.

Arthritis: Is a disease-causing painful inflammation and stiffness of the joints. Studies have shown that diets high in red meat cause a higher risk of this disease. A vegan diet can help because of the polyunsaturated fatty acids consumed, especially help ease the symptoms of those with rheumatoid arthritis.

To conclude, a whole foods plant-based diet can aid prevent disease, sometimes even revert them. It also wouldn’t leave you protein deficient as some people may think.

I have learned a lot of the above information from my nutrition course as well as various documentaries such as “Forks over Knives”, based on the China Study book. Hope you can take some points away with you today.